Below is a brief description of some of the major issues that the DSA has chosen as areas to focus the organizations efforts. These are however not all of the issues the DSA has and continues to address, and some may fall under the larger heading of one the issues below.

We firmly believe that healthcare is a right, and so should be provided to all people as a collective initiative. If there's anywhere that healthcare doesn't belong, it's in the hands of the market and private for-profit interests. When we take the health and well-being of people and turn it into a mechanism for profit, there will be guaranteed abuses and cruelty. Under the current private healthcare system, profits come before people, and tens of millions who already struggle to make ends meet are drowning in healthcare debt, or just not seeking treatment because they can't afford it. Medicare for All is the only way forward for common sense healthcare coverage that leaves no one behind.
Visit the Medicare for all campaign website 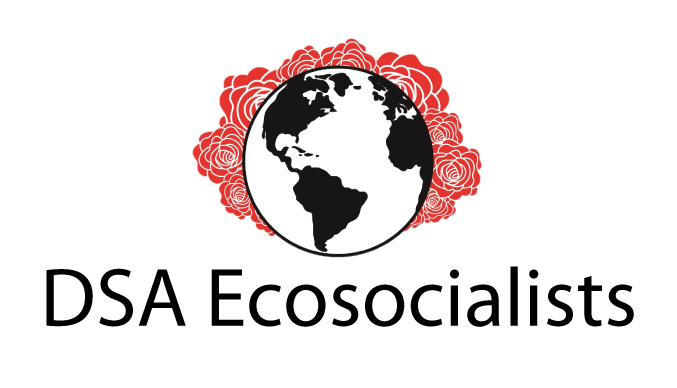 The fact that climate change is happening is indisputable, and scientists agree that human activity is playing a major role in rising global temperatures, and unless we do something about emissions, then our planet can be a dramatically different place in the not so far off future. This is of interests to the DSA because this is of interest to everyone. Corporate giants continue to flood the atmosphere with green house gasses, taking only their profits into consideration. Meanwhile, our societies are threatened by the effects of climate change. We call for the replacement of fossil fuels with renewable energy sources, and the democratization of energy production so that no one group is gaining massive amounts of wealth from the energy industry.

In line with the mission to combat climate change, the DSA Ecosocialists have endorsed the proposed Green New Deal. This initiative is aimed at cutting carbon emissions, creating jobs in renewable energy, and creating a more stabilized economy.
​
Read: An Ecosocialist Green New Deal: Guiding Principles

With the rise of Bernie Sander's and the political revolution that resulted, we are committed to supporting a new wave of political candidates who are proposing policies in line with the democratic socialist mission. Our goal is to get to a place where democratic socialists gain a strong influence in government, and also to hold politicians accountable to the public rather than to wealthy donors.
Learn More

A main feature of capitalism is an authoritarian structure of the workplace. Workers, who put in the labor required for production and operation of businesses everywhere, remain under the power of owners and managers whose primary focus is profits. That means that wages may rarely go up with the cost of living, benefits are often kept to a minimum, and workers can be let go on a whim. This is why a main feature of democratic socialism is the democratization of the workplace, putting the power usually reserved for a small owner class into the hands of the everyday worker. We believe there is no better way to ensure fair wages and benefits for every worker outside of empowering workers with strong unions.
Learn More